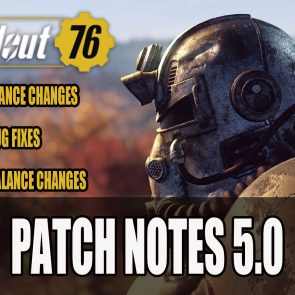 Bethesda has released Patch 5.0 for Fallout 76 this week which includes a range of fixes for the game. The patch also comes with performance and stability improvements as well as some balance changes for perks.

The new patch addresses some of the bugs as well bring new balance changes for perks Demolition Expert which has reduced damage bonuses. White Knight and Licensed Plumber get condition loss bonus updates as well. Weapons are also getting some adjustments with both Explosive Legendary and Explosive Two Legendary getting reduced weapon damage. Flamers, Cryolators, plasma weapons, and laser weapons can now no longer spawn with legendary mod.

PVP mode will now display a message when players are in queue for Hunter/Hunted mode. You can check the full patch notes below:

The new patch is roughly 3.5 GB for console versions and 500 MB for PC.

If you want more Fallout 76 content be sure to read next Fallout 76’S New Survival PvP Mode Relaxes The Rules and Bethesda Assures Fallout 76 Will Not Go Free-To-Play. If you’re venturing to the Appalachia you can check out our Fallout 76 guides.