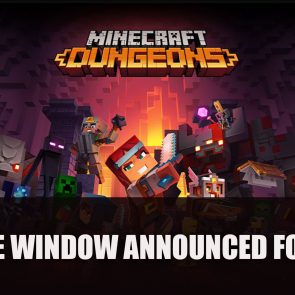 A new teaser trailer for Minecraft Dungeons has been released announcing the release window.

The Minecraft themed dungeon crawler got a new teaser trailer today along with the release window for April 2020. Minecraft Dungeons takes on the same voxel look of others in the franchise but concentrates on both single player and party mode, with classic dungeons to fight through with up to four players.

This is the first stand-alone game developed by Mojang set in the Minecraft universe since the initial game. Expect RPG elements with questing against the villainous Arch-Illager and plenty of treasure to discover.

You can check out the latest trailer below:

You can also catch some of the gameplay released at E3 earlier this year here:

Minecraft Dungeons will release in April 2020. Available on PC, Xbox One and Xbox Game Pass.

For more news be sure to read next Wasteland 3 Release Date Announced For May 2020 and Crimson Desert Trailer Unveils ‘A Saga Written In Blood’. You can also check out Google Reveals Stadia’s Launch Day Game Line-Up.

Anything about this is so…